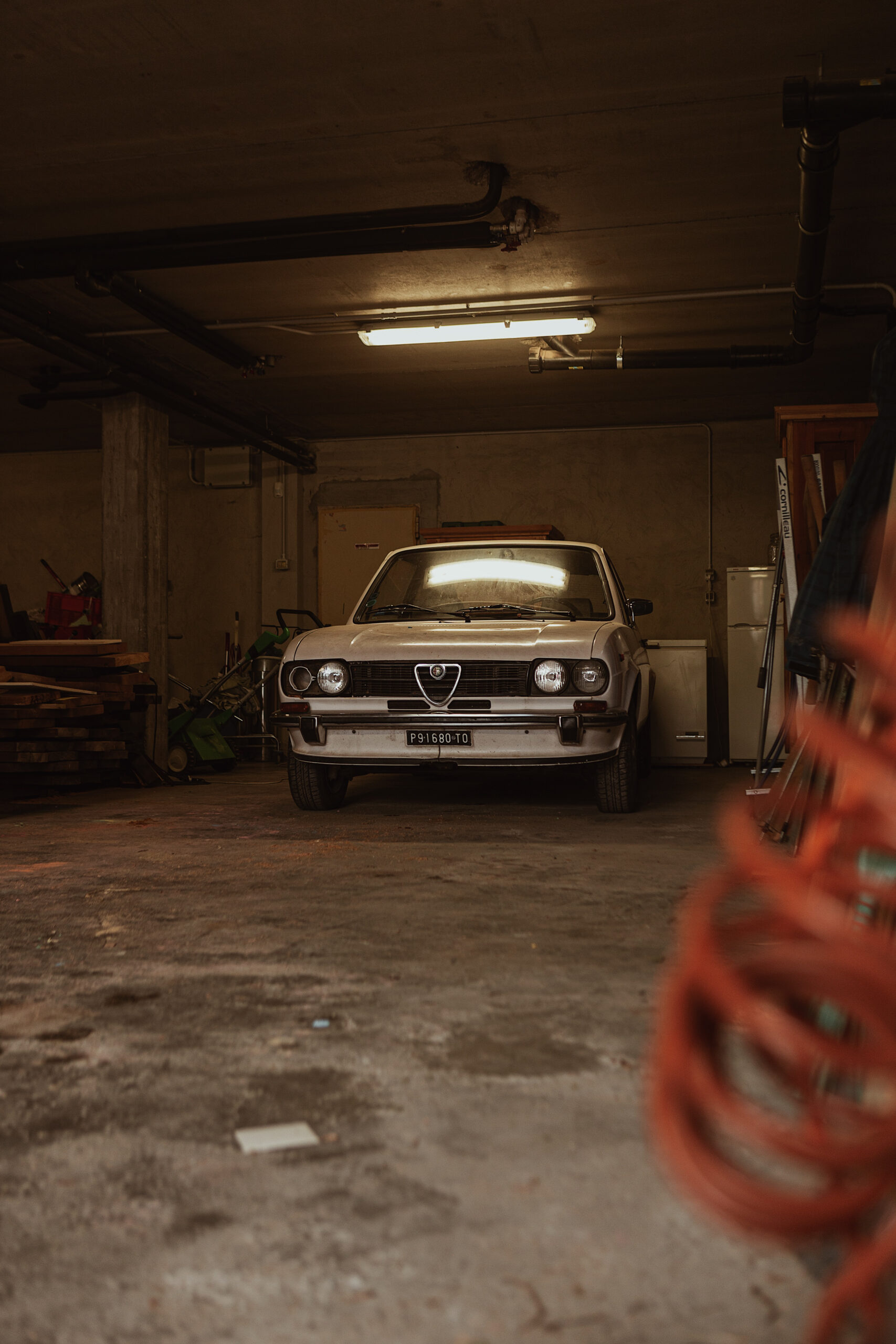 Early October, 2019. We receive a phone call from a very close friend. While visiting one of his customers in Val di Susa, he caught a glimpse of an Alfasud quietly resting in a carpenter’s warehouse and, surprisingly, the owner was somehow interested in selling it. We instantly want to know more about the car, but the man – one of those characters grown up in the mountains – doesn’t want to waste any further time, so our friend and him set up a visit for us the following week.

Ten days later we take a day off and we drive to that location in order to see the Alfa Romeo. Once arrived we meet Renato, the owner. He is a man of very few words, living in a cosy chalet. After a few minutes, Renato walks us in his basement garage with suspicious and cautious manners.

No doubt, there is a white Alfasud Ti prima serie, bearing its very first registration plates.

We begin to walk around the car, still a little excited, aware of the fact that we have one of a kind car right in front of our incredulous eyes. We start enquiring Renato, who slowly opens himself and starts to tell us a bit of that car’s history, mixed up with some good memories.

It was bought brand new in Turin by his father, back in 1977. That Alfasud has always been a part of the family and rarely used. This happened because, at that time, a car like this one was quite a luxury toy and Renato’s family didn’t want to show off. The car spent more time in the warehouse than on the road, and its 51.000 km demonstrate the thriftiness it has been used with.

We are nothing but farmers

Renato keeps telling us about his humble origins and, despite the fact he now manages a nice agriturismo together with his wife, cannot explain the reason why his father bought such a cool car back in the days. He also recounts that he never use the car, not even on his wedding day occurred in the mid 80s: this Alfasud has been just driven for very short errands in the village.

Some clear aging signs are visible, a bit of rust appeared on body’s hinges, but the whole original patina covering the first paint is superbly preserved and that bit of interior dust makes the car ever more fascinating.

Suddenly a folder emerges from a drawer. It contains all the original documents, service invoices and so on, the original Alfasud Ti owner’s manual as well as all the car taxes’ and insurances receipts from 1977 to 2003, last year that white unicorn has seen the road surface.

Renato insists on taking the car out. As he connects the battery, with just a few throttle hits, the engine turns on and starts revving perfectly. Engaged the first gear, the car crosses the warehouse’s door almost on idle.

Over the years, I always moved the car once in a while: a small ride around the warehouse, on the green grass and that’s it

It’s now time to initiate the proper negotiations, as we need to clearly understand if he’s really interested in selling that white piece of a masterpiece. Few minutes later, according to Renato’s sincere nervousness we comprehend he’s not yet ready to let his Alfasud go. We leave with a promise tho: if he will ever wanna sell it, we have to be the first to receive his phone call.

Two years later – punctuated with occasional phone calls rejected by a simple “It is not yet the time, I wanna keep it a bit more” – last August, we got the call we were really waiting for. We then organize for the pick up and we return to that Val di Susa chalet with a tow truck: the car is always there, same position, same look.

We feel Renato is nervous, he wants to close the deal very quickly. As the white Alfasud sits on the truck’s platform, tears start to flow. That small car stayed within Renato’s family for so many years and now found a new home. We promise we will come back during the spring season, and the car will be mint. While we are about to leave, he confides he received several very good offers during last summer from some Germans who were spending their holidays nearby. He always refused them, as he wants his Alfasud Ti to stay in Italy, in Turin, not in another country.

Here’s our Alfasud Ti’s story and we feel more than lucky being able to write it here. A truly special gift, on Alfasud’s 50th anniversary year.

Next
Heritage HUB and Officine Classiche