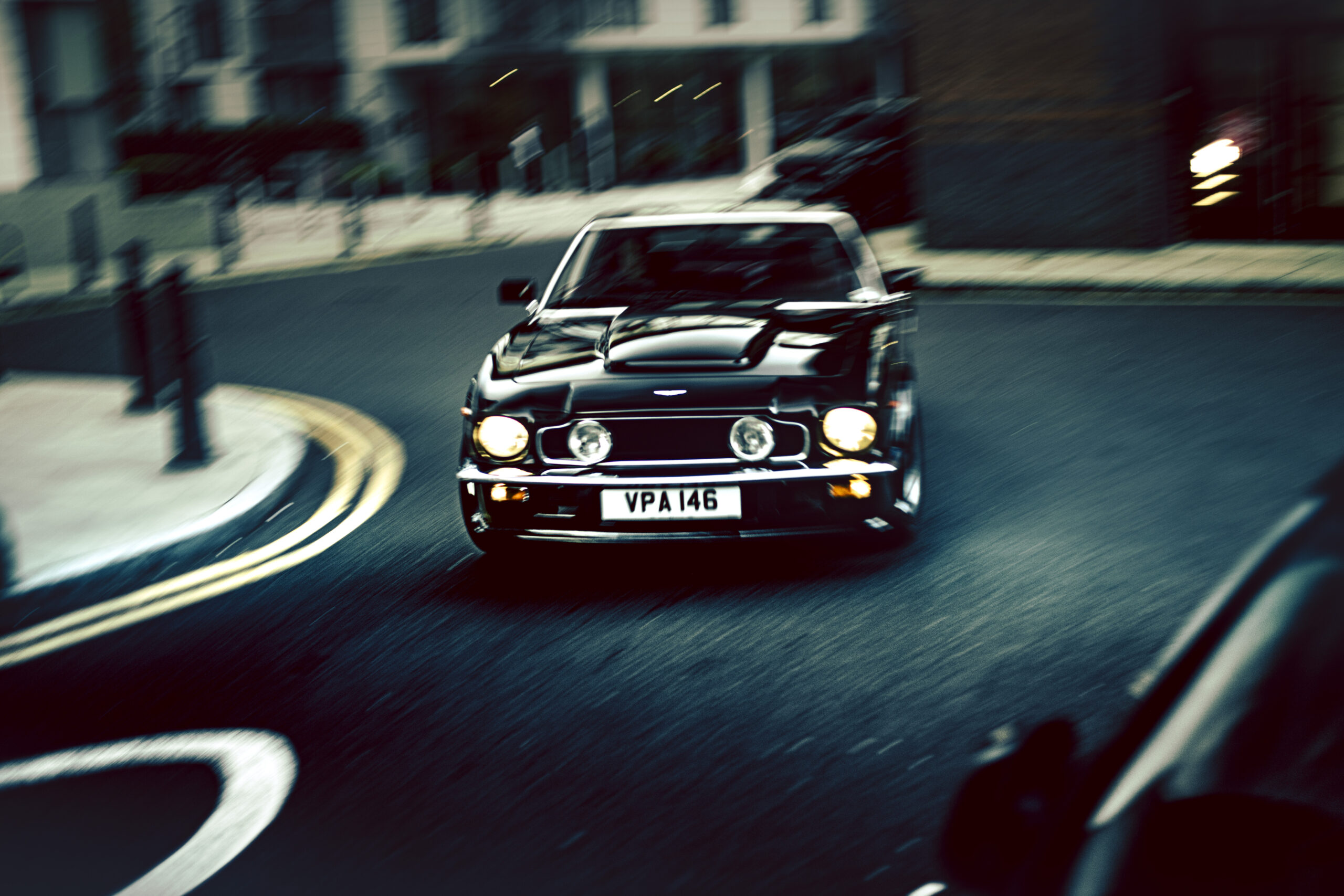 The big spaces. Built as an ode to human greatness, yet they can so easily make one feel so small. So overwhelmed. So unwelcomed. So out of place. And yet, despite the harshness of this stage, there is a way to more than hold your own against a backdrop made out of towering buildings and impossibly wide roads. There is a way to make yourself stand out. No matter how big a space can get, it will always be dwarfed by a big idea. Presence is something that comprehensively trumps size. This black Aston Martin V8 provides a compelling masterclass in how to achieve just that, gracefully transcending its dimensions to claim the coveted high ground.

Against the silent buildings, the growl of the 7.3l V8. Against their static contemplation, the neck snapping acceleration. Against the sky scraping monoliths, the muscular sculpted body. It’s a car for big moves. Looking the part and delivering that all important big drive. It’s not meant to be nimble, it’s meant to be commanding. It’s created to deliver an intoxicating experience of power. A much upgraded engine, paired with a beefed up AP Racing brakes package, keeping its cool courtesy of an aluminium radiator, making sure that this beast never even breaks sweat.

In front of us is one of the flagship creations of Pugsley and Lewis, the South London based Aston Martin specialists, who have been dedicated to the brand for over 30 years. Owned by co-founder Tim Lewis, this car instigated the development of a number of industry first upgrades, focussed on the Aston Martin V8 range. You would be tempted to think that the exterior, particularly that confident bonnet bulge, has been revised as well, but, despite the looks that are just as compelling today as they were back in the 70s, it was left completely stock, although the pairing of the early spec bonnet with the late spec Ronal wheels is unusual. Tim just loves it looking that way, he just wanted the car to offer a drive that can be just as rewarding, especially in modern traffic. It’s a very interesting package. The red leather seats are soft and welcoming, the ride absorbs the small bumps, but instantly responds to the big ones, the steering is heavy and direct. It was never meant to be lightweight. Just look at the size of Aston Martin letters on the engine’s cam covers. Where other manufacturers were drilling holes everywhere they could think of in order to save weight, Aston Martin added a good few hundreds of grams just to get their name visible in the engine bay. This is not how you win races, but it may very well prove to be a winner if the contest is about usable performance. The manual gearbox gives that mechanically satisfying experience, extracting all the potential from the V8 and, at motorway speeds, it has enough power in reserve to embarrass some modern performance cars, should the circumstances require that. On a long journey, the miles fly by and the grand touring magic of the Aston Martin V8 works just as it did decades ago, when it arrived on the scene to succeed the groundbreaking DBS.

Widely regarded as British design icons, the bodies of the early DB series of Aston Martin were in fact created in Italy, by Carrozzeria Touring, using their patented Superleggera construction method. That all changed in 1967, with the William Towns designed DBS, that later, in 1972, was revised to take the shape of the V8, a car that Aston Martin kept into production until 1989. Despite the incredibly long production lifespan, the production number is incredibly low, due to the fact that these were hand made cars, requiring over 1200 man-hours to finish. The engine’s factory displacement was 5.3l, which makes you appreciate just how special Tim’s car is. The V8 is also one of the coveted models that were used in the James Bond series, driven by Timothy Dalton in the Living Daylights. Although 007’s car was fitted with lasers and missiles, I very much doubt it drove anywhere near as well as the Pugsley and Lewis restomod, but it was still impressive enough to be selected for a comeback role in the upcoming No Time to Die.

We are in East London and the beautiful Art Deco building that the black V8 is circling is the historic former headquarters of the English CWS, the Co-operative Wholesale Society, the predecessors of today’s Co-operative Group. Opened in 1932, the building was an ode to the company’s ideology of co-operation and the many bas reliefs adorning the facade depict scenes of people working together. The building itself is an expression of the triumph of the company’s ideas, the result being one of the most spectacular of its kind in London. What makes us extra special is that the architects of the Art Deco movement were fascinated by cars and designed their creations with the aim to be observed from the cars speeding past them. We happily oblige.

As night falls, the silhouette of the V8 is slowly being reduced to a pair of inquisitive eyes. It is time to let this beast back into its natural habitat. I reluctantly say goodby and I watch it disappear into the sea of glowing lights that take over the metropolis at night. The sound still reverberates off the surrounding buildings long after the car is out of sight. I can’t help feeling a bit empty, but also inspired. This car truly moved me. Big time.