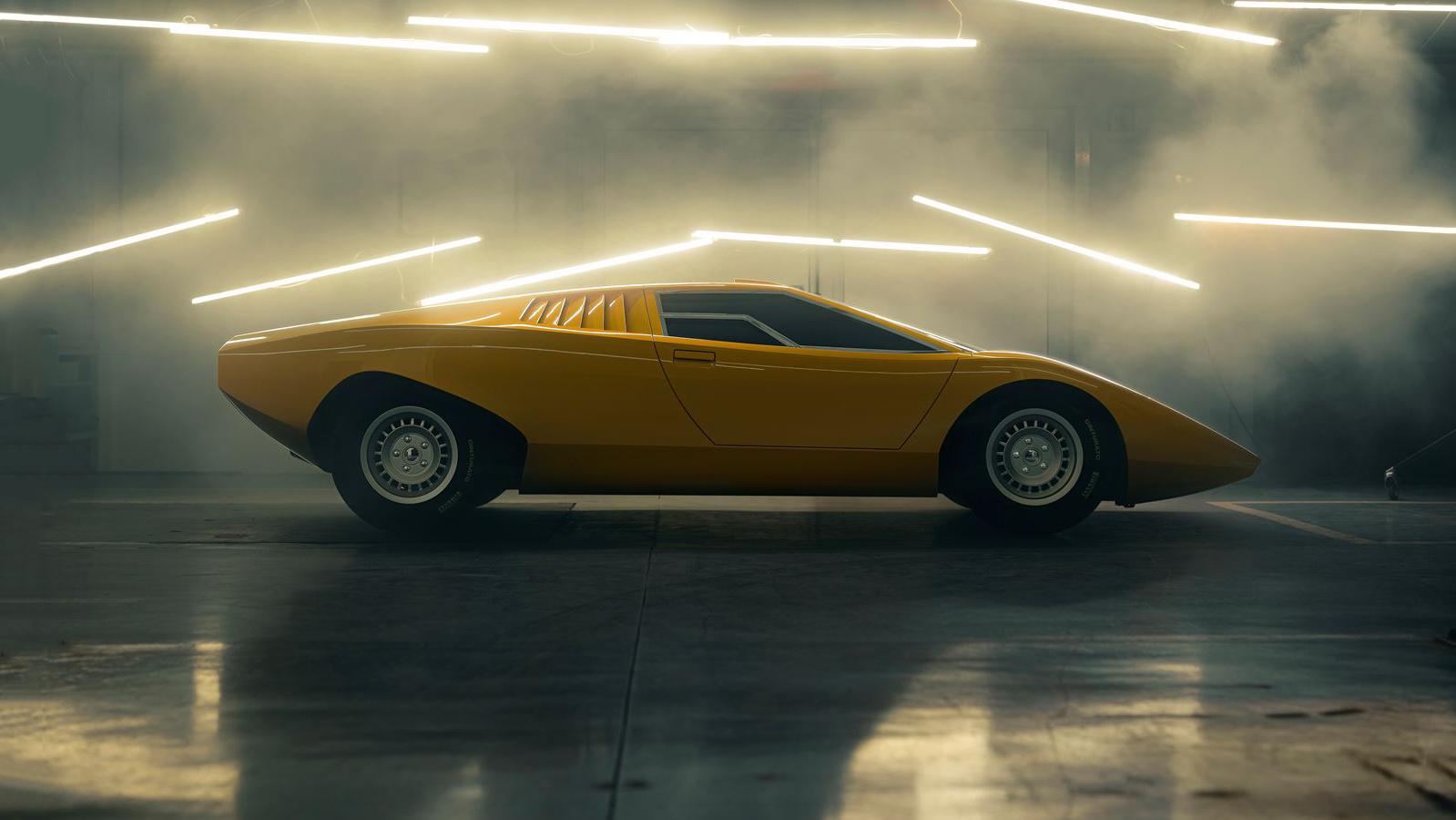 The Countach LP 500 has returned and entered the Concept cars class at the last Concorso d’Eleganza Villa d’Este. It is a passionate reconstruction carried out by Automobili Lamborghini’s Polo Storico that required over 25,000 hours of work on behalf of an important collector. The contribution of the Lamborghini Centro Stile was fundamental in the reconstruction of the bodywork and supervision of the styling.

At the Geneva Motor Show in March 1971, Lamborghini presented its brand new prototype, the Countach. The car immediately became the star of the event, and the photographs of it, which went viral, were published in major magazines around the world. This new model was conceived to replace the legendary Miura and wrote a new page in the automotive history both for its technology and design. After three years of development, the LP 500 was sacrificed in crash tests in March 1974 and then disappeared.

At the end of 2017, a classic car collector and important Lamborghini customer asked Polo Storico if there was any possibility of creating a reconstruction of the Countach LP 500, known until today only through old photographs.

The first months were spent acquiring all the material available and undertaking an in-depth analysis. Photographs, documents, meeting reports, original drawings, and the memories of some the protagonists of the time: all this contributed to establishing the form and function of every single detail as accurately as possible. The support of Fondazione Pirelli was also fundamental in providing historical archive material to recreate the tires mounted on the original LP500 model.

The work began on the platform chassis, completely different from the tubular frame of the Countach models that would follow. In addition to physically redesigning it, Polo Storico had to decide which work system to use for building it in order to respect the production methods of the time. The same procedure was used for the bodywork, with various modern technological instruments employed for its analysis and definition. Once the sheet metal beating phase was reached, technology gave way to the traditional Italian system, carried out by the battilastra with his creativity and tools. A similar process was followed for the interior, which included the lighted diagnostic instruments, as shown on the 1971 prototype.

For all the mechanical components, as in 1971, original Lamborghini spare parts or restored components of the time were used, or failing that, parts were completely rebuilt.

For the historical reconstruction part of the original design, Polo Storico turned to the Lamborghini Centro Stile where the team led by Mitja Borkert, Head of Design, set to work on a very challenging project.

The LP 500 is of paramount importance to Lamborghini because it gave rise to the design DNA of all subsequent models. To arrive at the car that debuted in Geneva in 1971, a 1:1 scale styling model was developed, which along with the car itself was lost over time, but extensive photographic evidence of it remains. This is the same approach with which we decided to tackle the project. Starting from publications of the time, from images on homologation sheets and other material recovered from Polo Storico, we were able to reconstruct the mathematics necessary for creating the first 1:1 scale model. The biggest challenge was to create the exact volume of the car, and for this we used the opportunity to take a 3D scan of our LP 400 (chassis 001), which was an enormous source of information. It took us 2000 hours of work altogether to arrive at the final model, with lines that satisfied us. The exact same procedure was followed for the interior.

The collaboration with Pirelli – in existence since 1963 – to reconstruct the tires mounted on the LP 500 prototype proved to be invaluable. Thanks to the images and materials preserved in the archives of Fondazione Pirelli, it was possible to use the original plans of the Cinturato CN12 tire fitted on the LP 500 for its Geneva debut. From these documents, the Milanese company’s technicians set out to create the Cinturato CN12 of the Pirelli Collezione range, today’s line of tires dedicated to the most iconic cars built between 1930 and 2000, which preserve the originality of the rubber by combining a vintage image with modern technology.

When it came to choosing the color, the PPG archives proved to be crucial, making it possible to identify, after careful analysis, the exact composition for producing the yellow color used, identified as Giallo Fly Speciale.