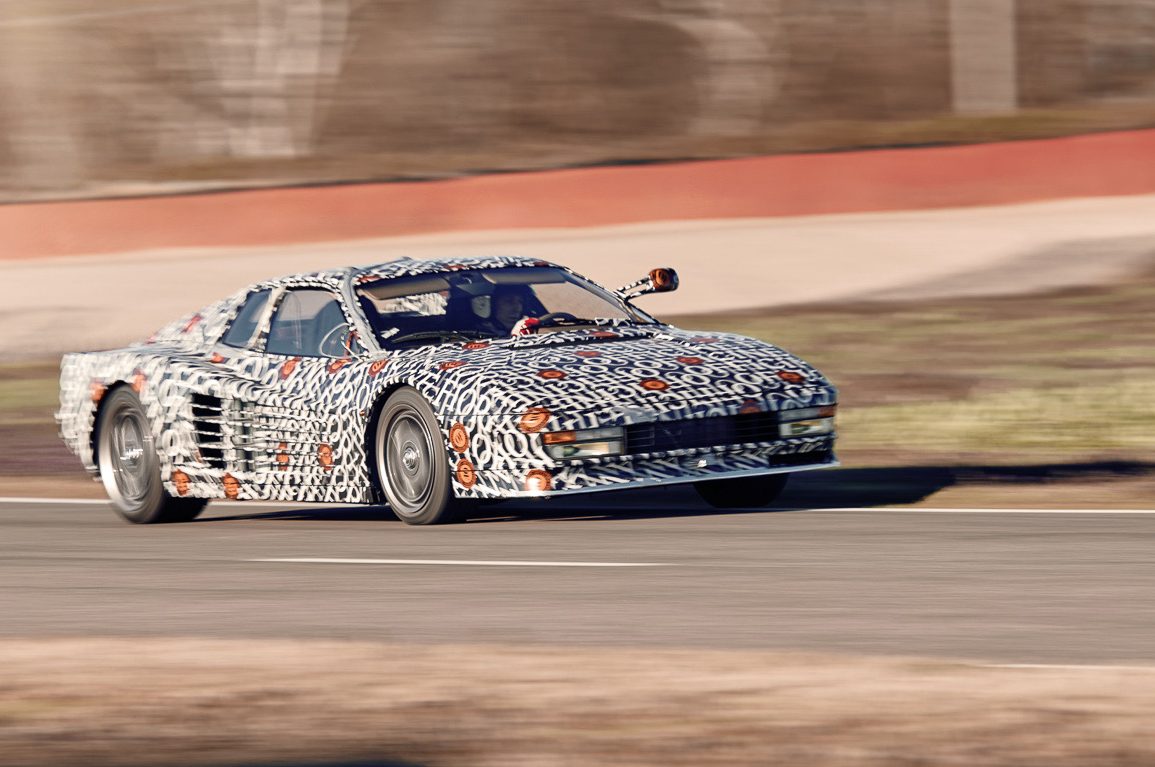 Miami, late-1980s: detectives Sonny Crockett and Rico Tubbs are driving around the city, working undercover in their Armani suits and bringing down various criminal enterprises in southern Florida. Perfectly matching the contemporary new wave culture, pop and rock music of the time, their daily commuter is a white Testarossa monospecchio monodado. One car, one dream, the pure quintessence of its era. A legend that has been revived to offer the ultimate Testarossa driving experience, on open roads as well as on the race track.

Today, after a 14 month-long journey, Officine Fioravanti announced the upcoming launch of its first project. Blending together Italian engineering and craftmanship techniques with the renowned Helvetic attention to details, they realized a state-of-the-art piece of machinery while setting new standards. Their Testarossa is the final result of an extensive enhancement program based on one of the most desirable supercars of all time. Officine Fioravanti raised the bar to the top, creating a bespoke and incredibly refined product.

They kept the beautiful Pininfarina-penned body shapes untouched, as there were no reason to teach one more lesson to the Maestro. The unique side strakes still underline the doors, the car still bears its harmonically calibrated proportions with distinctive front and rear curvaceous lines. The Swiss-based team carefully listened to the car’s needs and desires, and they patiently took care of every single aspect. Few minor details have been changed in terms of style, without compromising a timeless design but enriching its pureness.

Aerodynamics, chassis and mechanics have been improved. They acknowledged problems and solved them. For example, their Testarossa is now able to reach more than 200 mph. It is more enjoyable, safe and precise. Guys slightly modernized the five-point star alloy wheels, increasing their size so todays performance tires can replace old ones. The car boasts Brembo® GT3 Class racing brakes, Öhlins® electronically controllable dampers, and adjustable anti-roll bars.

As for the engine, the almighty 4.9-litre 180° V12 underwent a meticulous piece-by-piece preparation, ending in a 9000 rpm redline and significant achievements in terms of power and torque. Internals have been re-defined, and now working symbiotically with a race-derived ECU and a titanium exhaust system. Testarossa by Officine Fioravanti also takes advantage of a 120 kg curb weight reduction. To further boost driver’s safety and driving pleasure the car can now count on a 12-way adjustable ABS and traction control system to meet every owner’s requirements. Side note: all mechanical and electronical modifications have been thought, developed and realized in-house. Something that does not happen frequently nowadays.

Looking at the interiors, there is a Fango-coloured two-seats sporty living room entirely covered by hand-stitched Italian leather. The quality perceived in the cockpit has been considerably improved by replacing original plastic components with ones machined out of aluminum. A new high-end audio system and “retro-tech” features complete the cabin.

As we speak, the crucial testing phase is going forward as planned and Officine Fioravanti wanted to give us a sneak preview of what their first-born product is.

We presume there will be much more to say about this project, and we are pretty sure  all the details will be revealed in due course. This is not just a restomod: “We brought future into the past, setting a new benchmark in the field.”

Next
C&V first ever NFT